"In extraordinary times like these, it is important to remain confident and focus on the future. This investment serves to underscore our forward-looking approach", is how Michael Steuler, Managing Director of Steuler Holding and Ulf Frohneberg, Managing Director of STEULER-KCH Materials summed things up.
Linings

It would have been the kind of ceremony that occurs maybe once a decade at Steuler. Representatives from the political and business worlds, press, academia and relevant industry sectors would have convened to celebrate the special occasion in a fitting manner. The inaugural lighting of a tunnel kiln is a rare and very special event for a ceramics’ manufacturer. After all, such a high-performance kiln only begins operation once and ideally runs for decades without interruption.

Due to Covid-19 restrictions, the ceremonial lighting of the 96-metre-long kiln took place under somewhat different circumstances, however. With around 80 representatives from all business divisions of the Steuler Group present, it was a rather small group that had the opportunity to witness the special event under strict hygiene regulations and usher in a new era of firing technology at Steuler.

The state-of-the-art high-performance tunnel kiln – which will create new jobs and increase the production capacity in Höhr-Grenzhausen by around 8,000 tonnes per annum – has been in operation since the 18th of August 2020. With immediate effect, Steuler's Höhr-Grenzhausen and Breitscheid factories now have the kiln capacity to manufacture a total of 60,000 tonnes of special refractory and acid-resistant bricks a year.

The new kiln will save up to 500,000 EUR in gas costs annually – while simultaneously increasing output. Thanks to its intelligent heat recovery system, the waste heat from the kiln operating at 1,350°C will be used for drying, heating the buildings and producing hot water. Because the kiln and ancillary facilities operate with such remarkable energy efficiency, the project was subsidised by the KfW (Credit Institute for Reconstruction).

The huge investment was accompanied over the past 17 months by comprehensive civil engineering works along the disused railway tracks and costly adaptation of the infrastructure for operating the kiln: The preparation area, presses, storage areas and packing lines in Höhr-Grenzhausen had to be thoroughly modernised and scaled up in order to cope with the larger capacity of the new kiln. The technicians from the kiln manufacturer Grün S.R.O. from Karlsbad (Czech Republic) were responsible for the installation and commissioning of the new kiln, and spent the past few weeks engaged in intensive preparation work at the Höhr-Grenzhausen site.

As soon as the new kiln has reached its final firing temperature after around eight days, its predecessor dating from 1951 can then be retired – it has only had to be shut down five times over the entire course of its service life. An efficient packing line including stretch-wrapping system will soon stand in its place and the raw material boxes are still to be converted in the next step. The increased kiln output requires greater storage space, so an area of 7,500 m² is being created for order picking too. Once all construction works have been completed, the grounds will be replanted. In order to restore the overall appearance of the landscape, a tree-lined avenue will be planted on the area that had to be cleared.

In the next few days, a video with fascinating shots of the interior of the kiln is now available on YouTube. 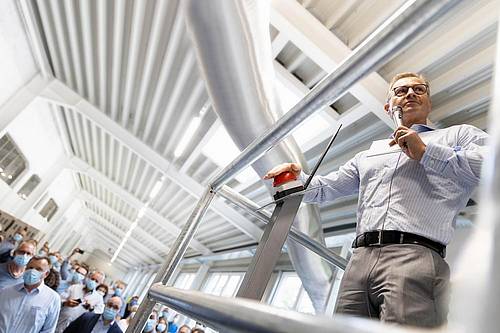 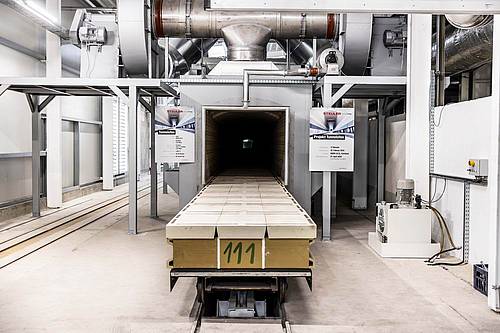